Since 2003, utilizing Twin Scroll turbo systems for high-performance track racing is how Full-Race staked our global on-track reputation. The following photo shows a Full-Race Twin Scroll Turbo Manifold on the left (divided flange) and a single scroll on the right (undivided open flange).

Twin scroll eliminates mixing losses and maximizes pulse energy to the turbine wheel. This configuration addresses many of the shortcomings of traditional single scroll (constant pressure) turbo systems, separating cylinders whose exhaust gas pulses interfere with each other. Similar in concept to pairing cylinders on race headers for N/A engines, twin scroll pairs cylinders to one side of the turbine inlet so the kinetic energy from the exhaust gases is recovered more efficiently by the turbine. In the case of a four-cylinder engine, the firing sequence is 1-3-4-2. As cylinder 1 is ending its expansion stroke and opening its exhaust valves while cylinder 2 still has its exhaust valves open (while in its overlap period, where both the intake and exhaust valves are partially open at the same time). In a single scroll, or “undivided constant pressure” manifold, the exhaust gas pressure pulse from cylinder 1 is therefore going to interfere with cylinder 2’s ability to expel its exhaust gases, rather than delivering it undisturbed to the turbo’s turbine as a twin scroll system allows. The result is quicker torque delivery when the driver needs it and similar low end performance to a twin-turbo engine but with high rpm efficient compressor flow of a single turbo. Twin scroll also enable the exhaust valves to stay open longer for reduced pumping losses that improve fuel consumption by ~1 percent.

Full-Race was approached by Ford powertrain engineers and BorgWarner Director of New Technologies, with the concept of prototyping a high performance 4cylinder EcoBoost engine turbo kit. Full-Race was asked to build (2) prototype turbo systems which could be CFD analyzed then tested in Ford’s Engine lab – we jumped at the opportunity. Work began on a 2.0L Classic engine, while detailed testing in the lab took place with a new prototype 2.3L engine. One of the prototypes we built was a traditional “single scroll” tubular equal length manifold, and the other our signature “twin scroll” design. The Ford Powertrain team loved our “twin scroll prototypes”, which proved extremely successful – scoring an average gamma value of 96% on these custom 2.3L prototype development lassic” motors, compared to only 78% found on the traditional single scroll configuration with the same engine. The results were mind blowing. The following Images show the details of our testing:

First, Full-Race engineers selected a runner configuration that would fit on this engine and serve the dual-purpose of twin scroll AND single scroll testing – using the identical runner layout, changing only the merge collector and flange geometries. 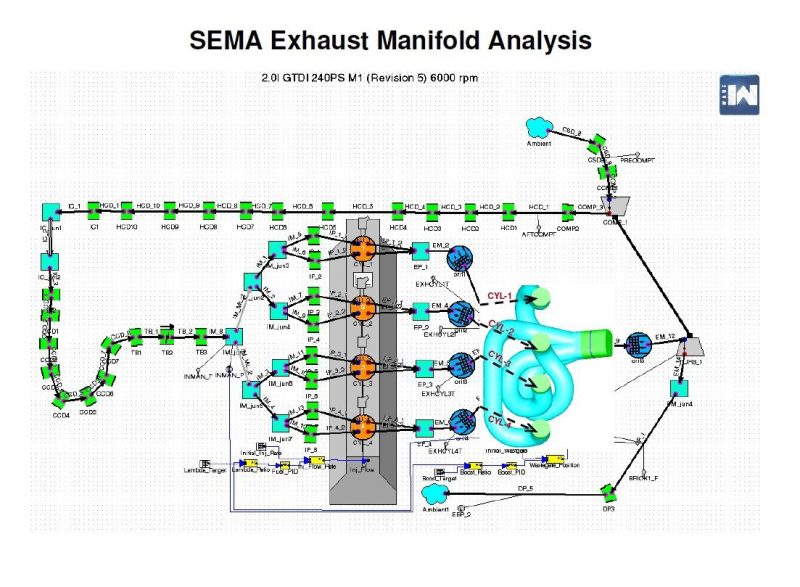 When looking at the overlay comparison, it’s easy to see that the twin scroll system maintains a much higher “Gamma” score, never dropping below 90%. However, the Single scroll configuration allows for a considerable drop in Flow uniformity, touching into the 70% range between every combustion event. This comprehensive CFD analysis was a success for all teams involved, showing a vastly superior Gamma score for the Full-Race twin scroll turbo configuration. Fast-forward to June 2011 where it was time to finally test on the prototype engine in the real world.

Ford On-Engine 2.3L Full-Race Twin Scroll Prototype Testing: Ford engineers successfully built a 2.3L prototype engine on which they could implement and fully test this twin scroll system – for real, on an engine-dyno. Using a special camshaft to drive an F150 EcoBoost GDI fuel pump, the fueling was in place for our target of 300hp/300tq with full boost by 2000rpm for a v8-like powerband.

The end result saw these targets were not only achieved, but surpassed – with 325 horsepower and 350ft-lb Torque realized under a conservative tune on pump gasoline.