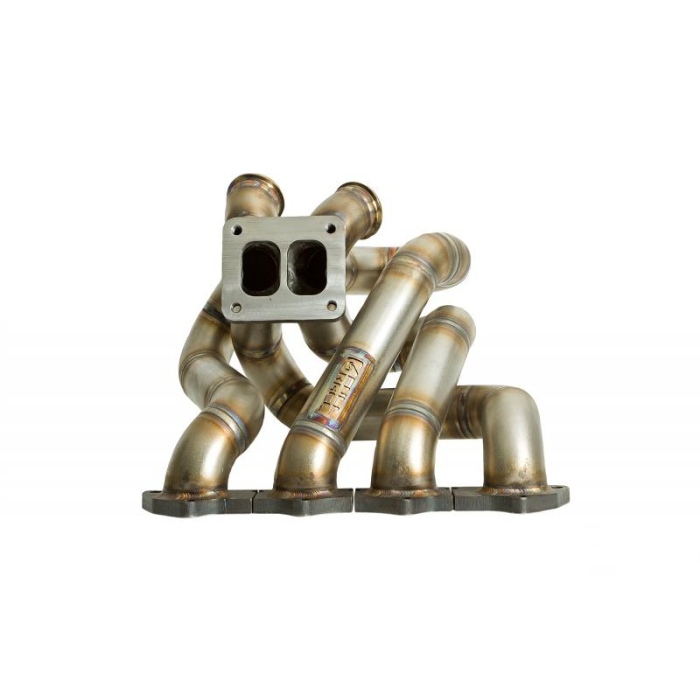 Skip to the beginning of the images gallery
Turbo Manifolds

Full-Race’s Honda / Acura T4 Divided Dual EWG ProAm Turbo Manifold is the most proven way to make big power on a turbo B-Series engine. Perfected through many years of racing and testing, Full-Race’s legendary Twin-Scroll Top-Mount manifold is designed to spool large turbos very quickly, producing massive powerbands that carry to redline. This manifold is designed for any high power application, where huge torque and great spool is necessary alongside big top end power.  Compatible with almost every turbo from every turbo manufacturer, if you want to make big HP on the B series platform, this manifold is proven to work.

Accurate boost control is enabled by the twin TiAL 44mm wastegates, allowing for huge amounts of wastegated exhaust flow – and good traction. This manifold is used and endorsed by virtually all of the top Outlaw and SFWD drag race vehicles on the race circuit today. Spool gains of 800-1000 can be realized, resulting in midrange gains of 100-200+ whp/wtq and tremendous top end gains. For the ultimate in B-Series turbocharging technology, look no further.

manifold and wastegates shown with custom fabricated dumptubes, going through the hood:

Twin Scroll turbo system design addresses many of the shortcomings of single scroll turbo systems by separating those cylinders whose exhaust gas pulses interfere with each other. Similar in concept to pairing cylinders on race headers for N/A engines, twin scroll design pairs cylinders to one side of the turbine inlet so that the kinetic energy from the exhaust gases is recovered more efficiently by the turbine. For example, if a four-cylinder engine’s firing sequence is 1-3-4-2, cylinder 1 is ending its expansion stroke and opening its exhaust valves while cylinder 2 still has its exhaust valves open (while in its overlap period, where both the intake and exhaust valves are partially open at the same time). In a single scroll AKA undivided manifold, the exhaust gas pressure pulse from cylinder 1 is therefore going to interfere with cylinder 2’s ability to expel its exhaust gases, rather than delivering it undisturbed to the turbo’s turbine the way a twin scroll system allows.

The result of the superior scavenging effect from a twin scroll design is better pressure distribution in the exhaust ports and more efficient delivery of exhaust gas energy to the turbocharger’s turbine. This in turn allows greater valve overlap, resulting in an improved quality and quantity of the air charge entering each cylinder. In fact, with more valve overlap, the scavenging effect of the exhaust flow can literally draw more air in on the intake side while drawing out the last of the low-pressure exhaust gases, helping pack each cylinder with a denser and purer air charge. As we all know, a denser and purer air charge means stronger combustion and more power… but the benefits of twin scroll design don’t end there. With its greater volumetric efficiency and stronger scavenging effect, higher ignition delay can be used, which helps keep peak combustion temperature in the cylinders down. Since cooler cylinder temperatures and lower exhaust gas temperatures allows for a leaner air/fuel ratio, twin scroll turbo design has been shown to increase turbine efficiency by 7-8 percent (faster spool, quicker response) and result in fuel efficiency improvements as high as 5 percent. It is wise to size the turbine housing A/R larger than the single scroll turbine A/R typically used!

More Information
Compatibility
Write Your Own Review
To Top